From Lindsay “Mike and I met in the summer of 2012, in a very non-traditional way!  We had several mutual friends, but never crossed paths.  I remember I had just completed my Master’s program at Duquesne University and felt inspired and on top of the world. I had always thought Mike was cute; I decided I was going to ask him out! YES, I was going to ask HIM out!  I figured what is the worst that could happen; he ignores me, oh well.  Shortly after Fourth of July, I sent Mike a facebook message asking him to grab a drink.

Our first date we tried going to a place called Nola, I remember it was so crowded we could barely move so we decided to take a walk and ended up at Sharp Edge Bistro Downtown.  We talked for what seemed like hours, ate bar food, and drank beer, not exactly the meal we had intended to eat, but it was perfect!  The rest was history! Just kidding.

Our love story continued when we moved out to San Francisco, California where we lived for a little over four years. Mike’s career took us there and brought us back to Pittsburgh.  Without a doubt our relationship was tested a handful of times.  We will be the first to say, it was the absolute best experience of our lives, and neither Mike nor I would have it any other way!  After all, our relationship only grew stronger through our experiences and we were able to enjoy so many first time trips and experiences together! When you move across the country not knowing one another that long, not knowing a single person, and truly relying on one another, it will either make or break you.  We decided it would make us.  It does not end there, we did not move just across the country, but we moved another three times while living in California and fell in love with our final stop in Walnut Creek, CA! One of our favorite places was wine country; we would go there quit often. I guess you could say wine tasting became a hobby of ours!  The landscape and scenery is breathtaking, the wine is superb, and we always felt so relaxed, maybe some because of the wine, though there is something to be said about a day in wine country that brings a whole lot of relaxation.

After moving across the country, then moving another three times, and four and a half years later, he finally popped the question Christmas Morning 2017! IT IS ABOUT TIME is right!   Our sweet California born puppy, Finnegan, was a big part of the proposal!  Every detail was perfect.  It was our first Christmas together in our very first home.  It was snowing, and we were opening gifts, Mike said he had a gift he could not wrap due to its size.  He went upstairs to get it.  He comes back down and blind folds me “because he doesn’t want me to see it”.  At this point, I was nervous and thought something was off, he tells me to open my eyes and there sitting in front of me is Finnegan, in a Tuxedo, with a sign around his neck asking, “Will You Marry Me”, as Mike got down on one knee!  I swear I must have blacked out after because I don’t  know what he said or what I said, no really, I was shocked and filled with so much happiness I forgot the rest! Wedding planning has been so much fun and I am enjoying every minute of it! Taking it all in, because it goes by so fast!”

The couple’s engagement pictures were taken in downtown Pittsburgh and their wedding is going to be at one of the golf club right outside of Pittsburgh this October! We ended our session at the same place where the couple had their first date.  How perfect is that? 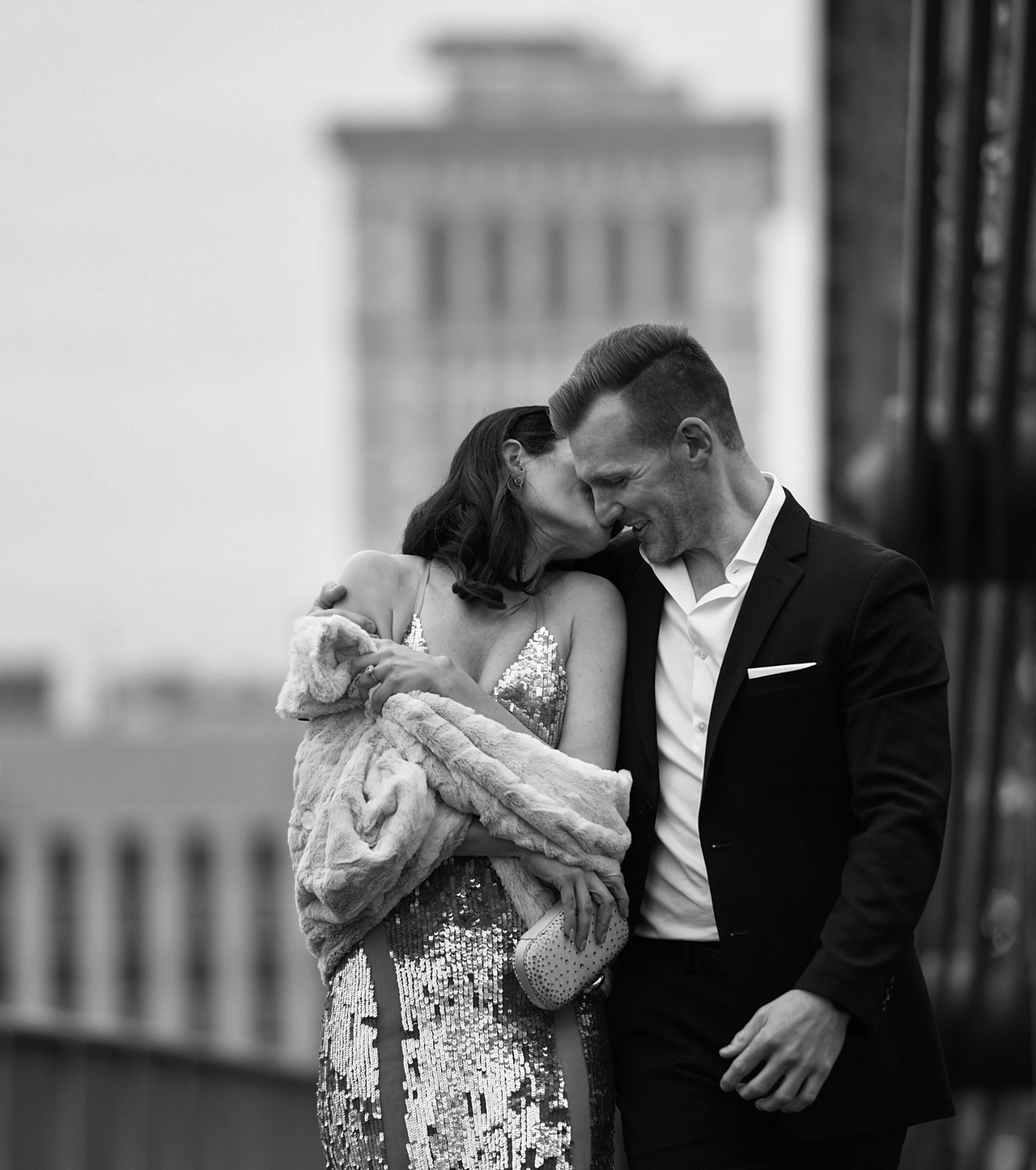 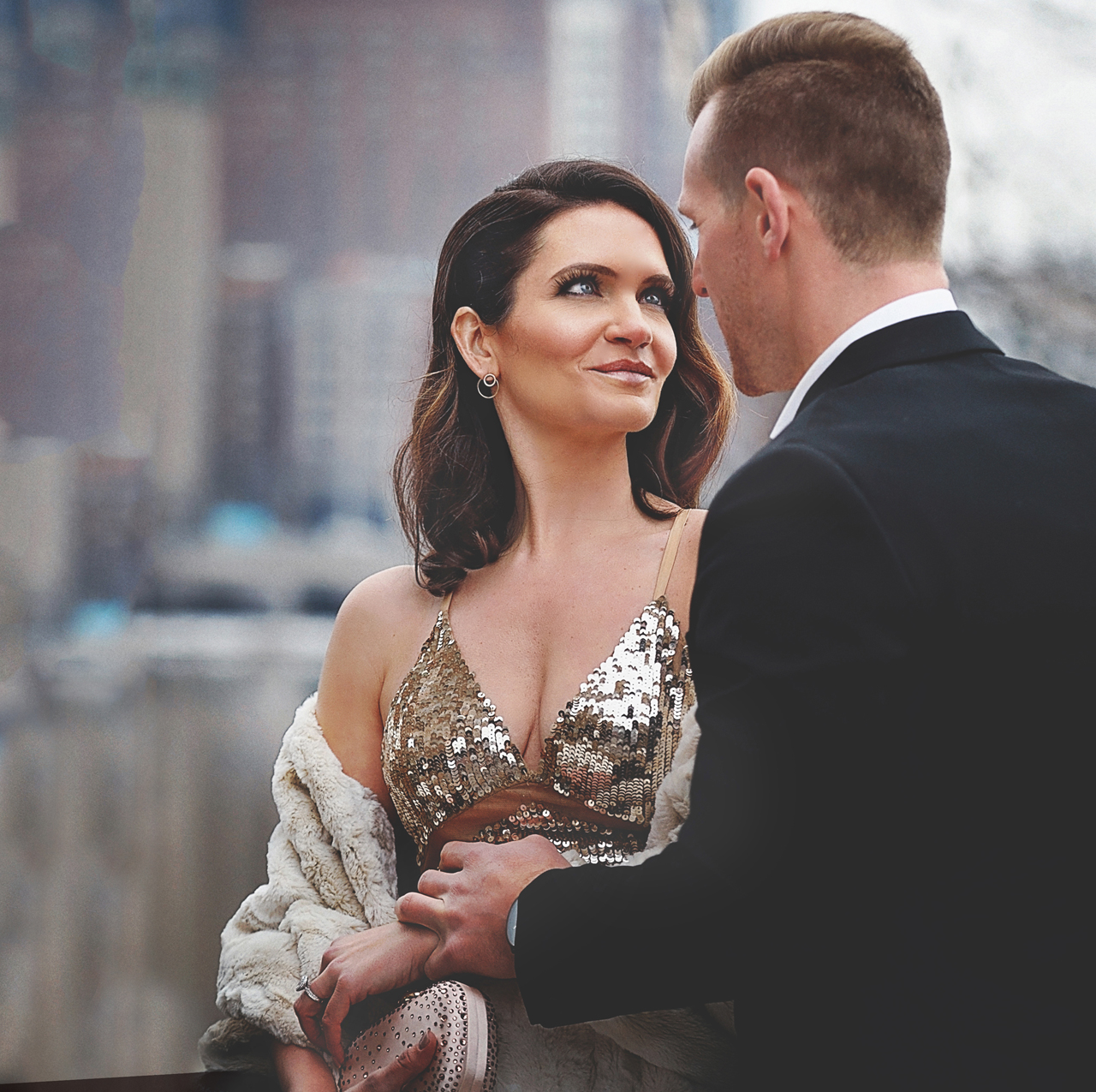 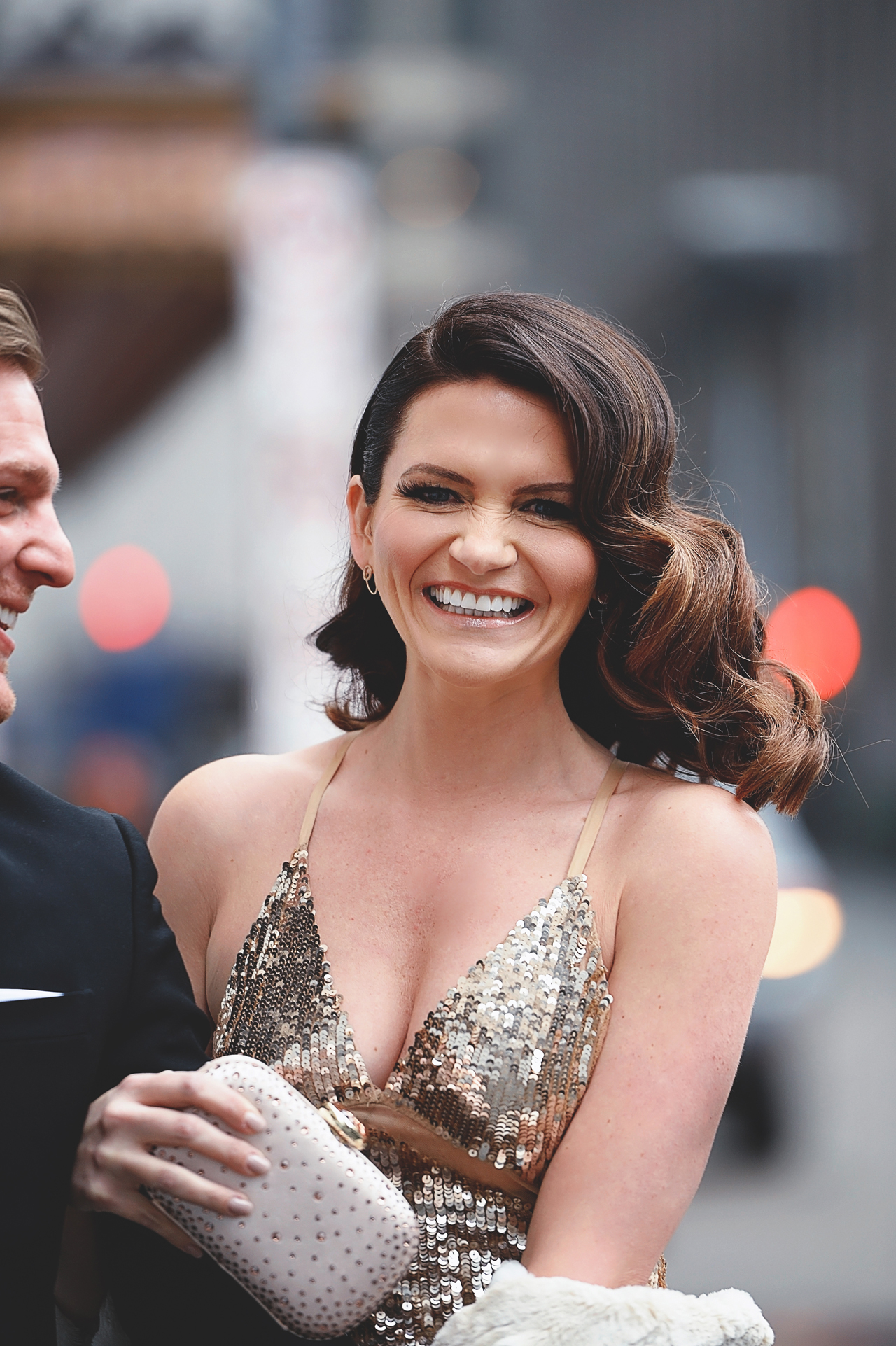 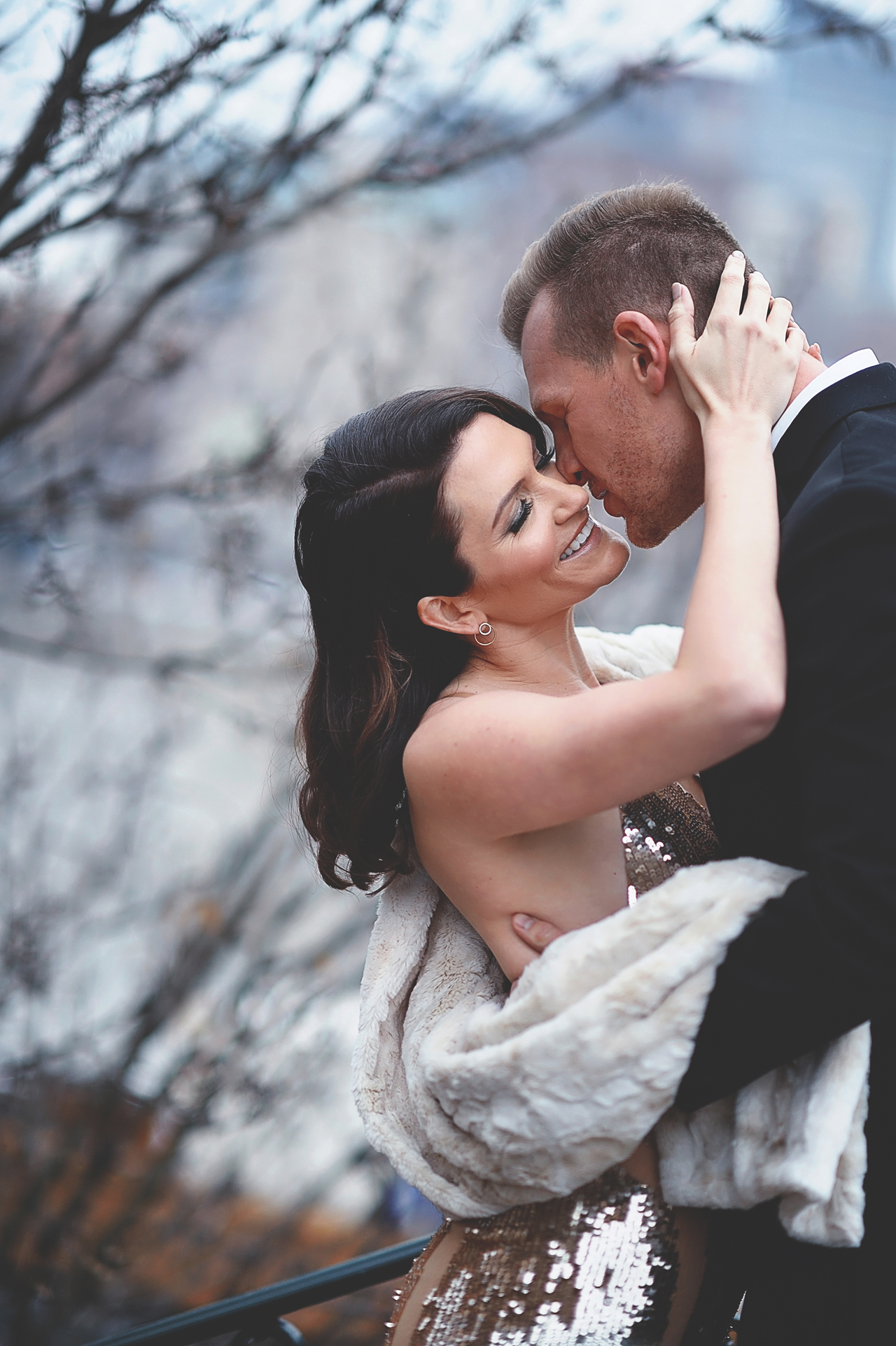 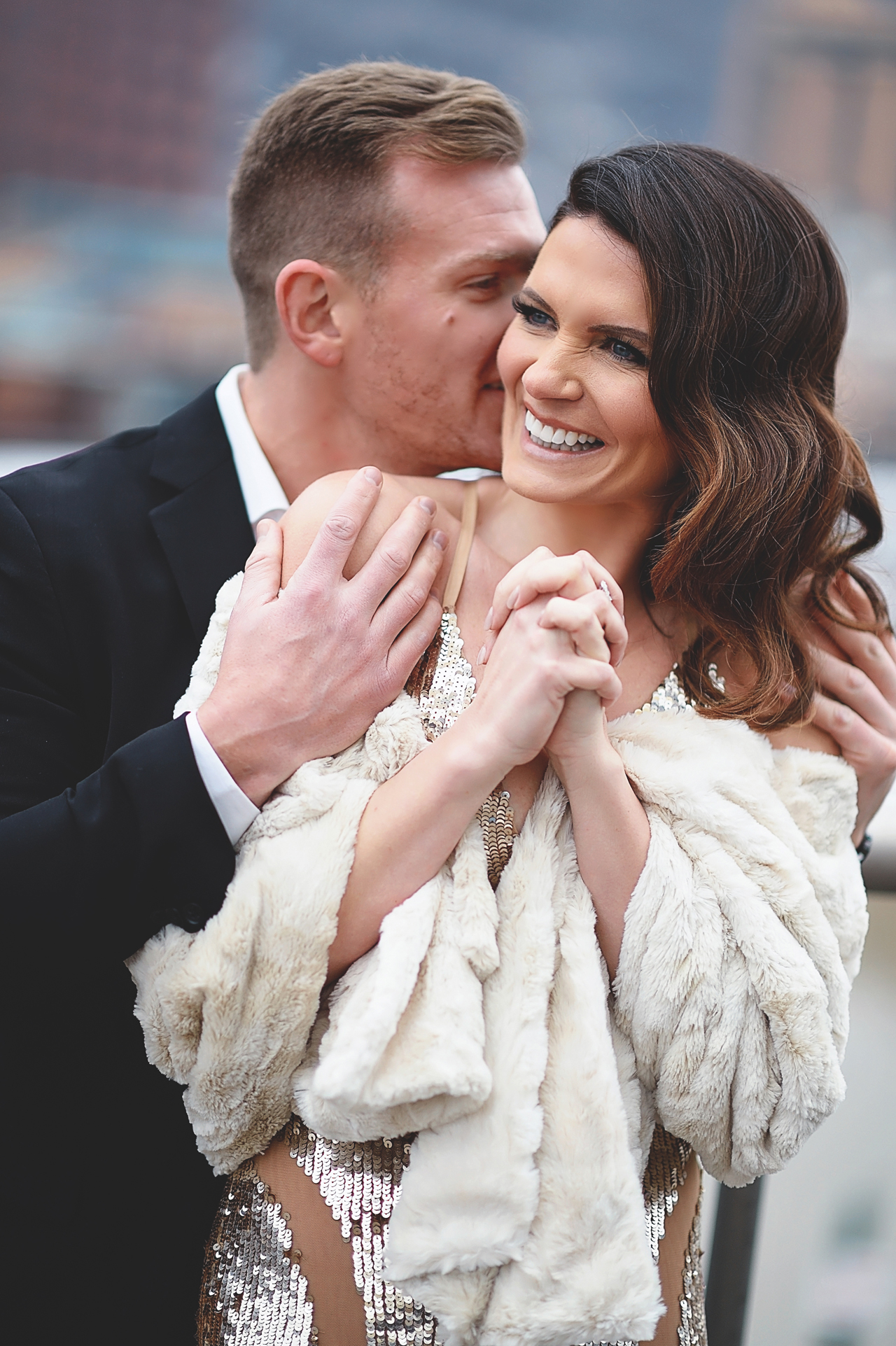 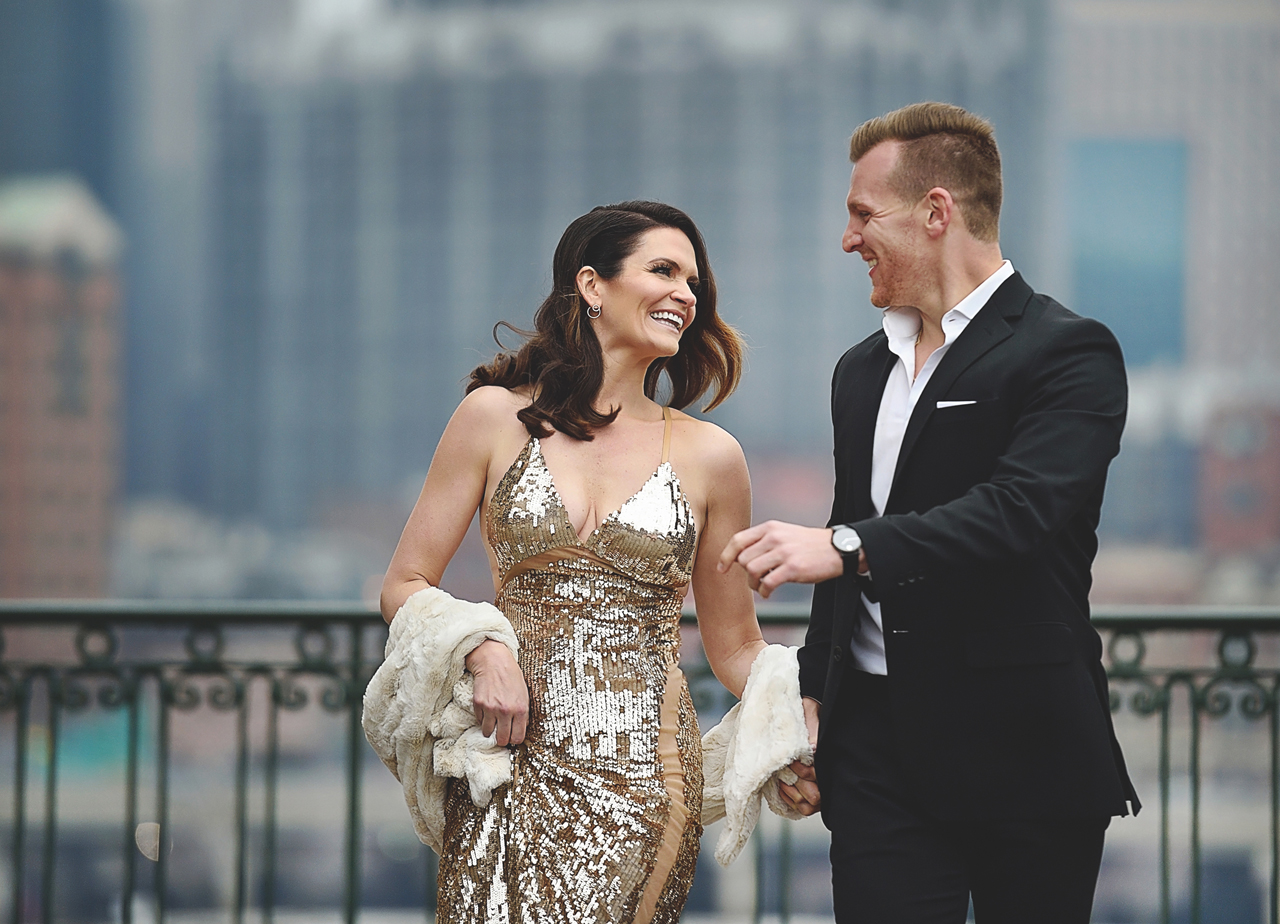 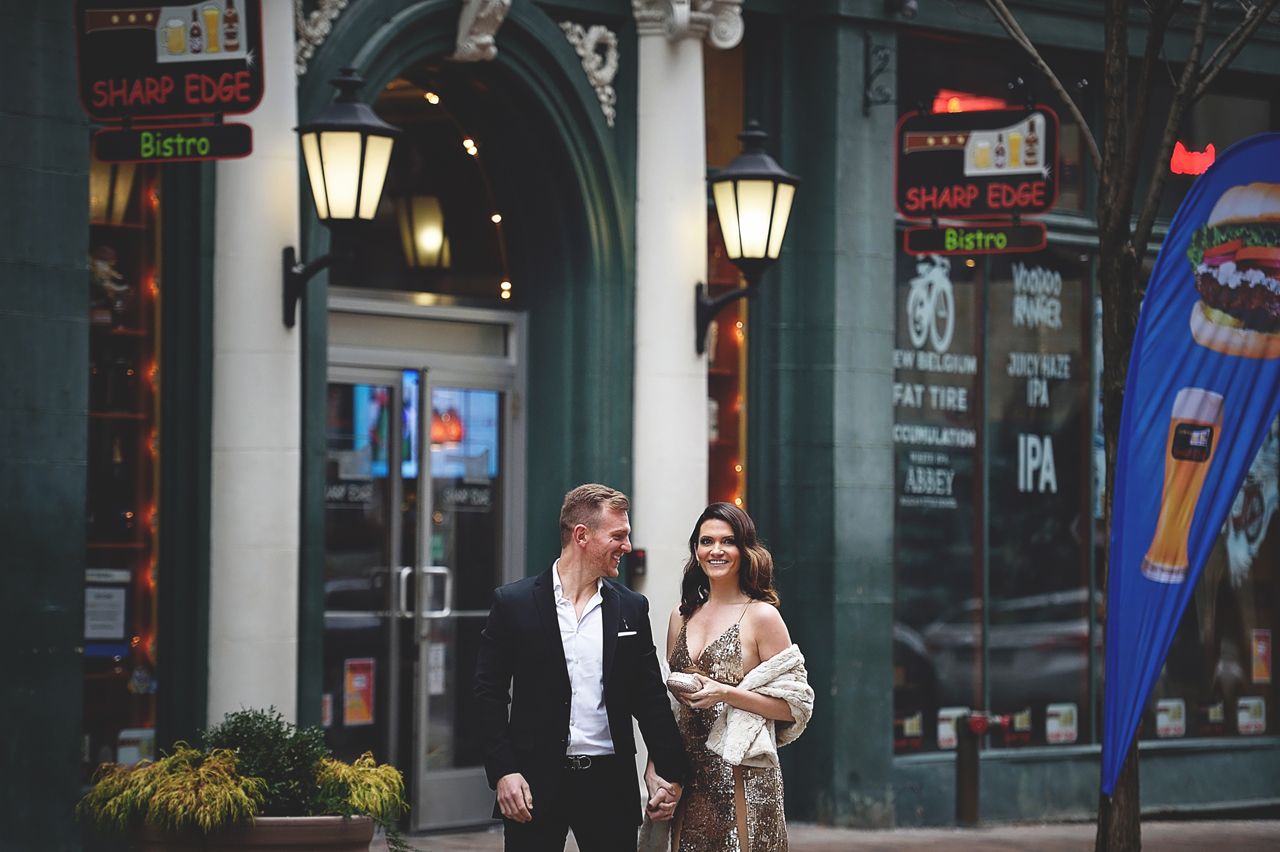 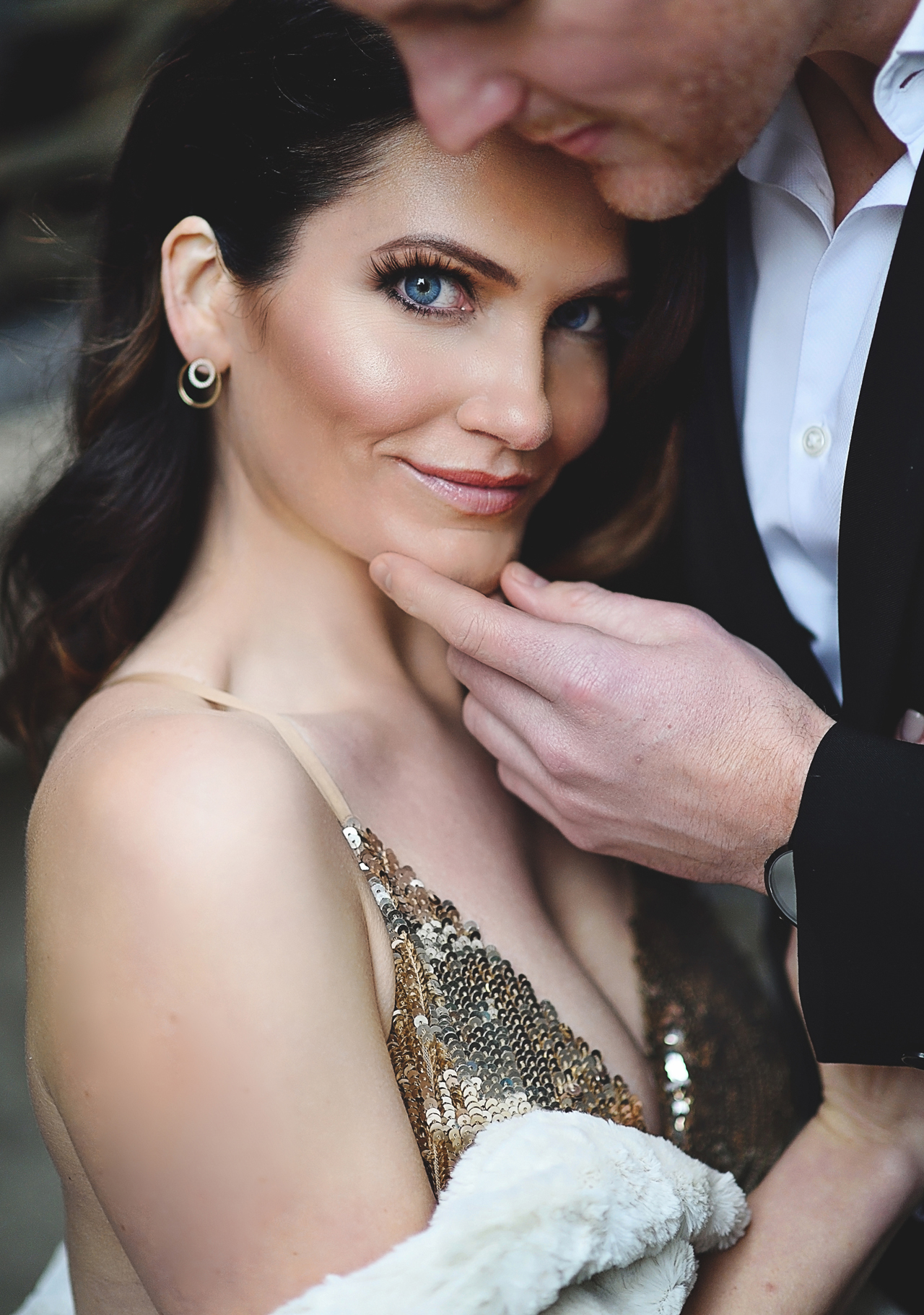 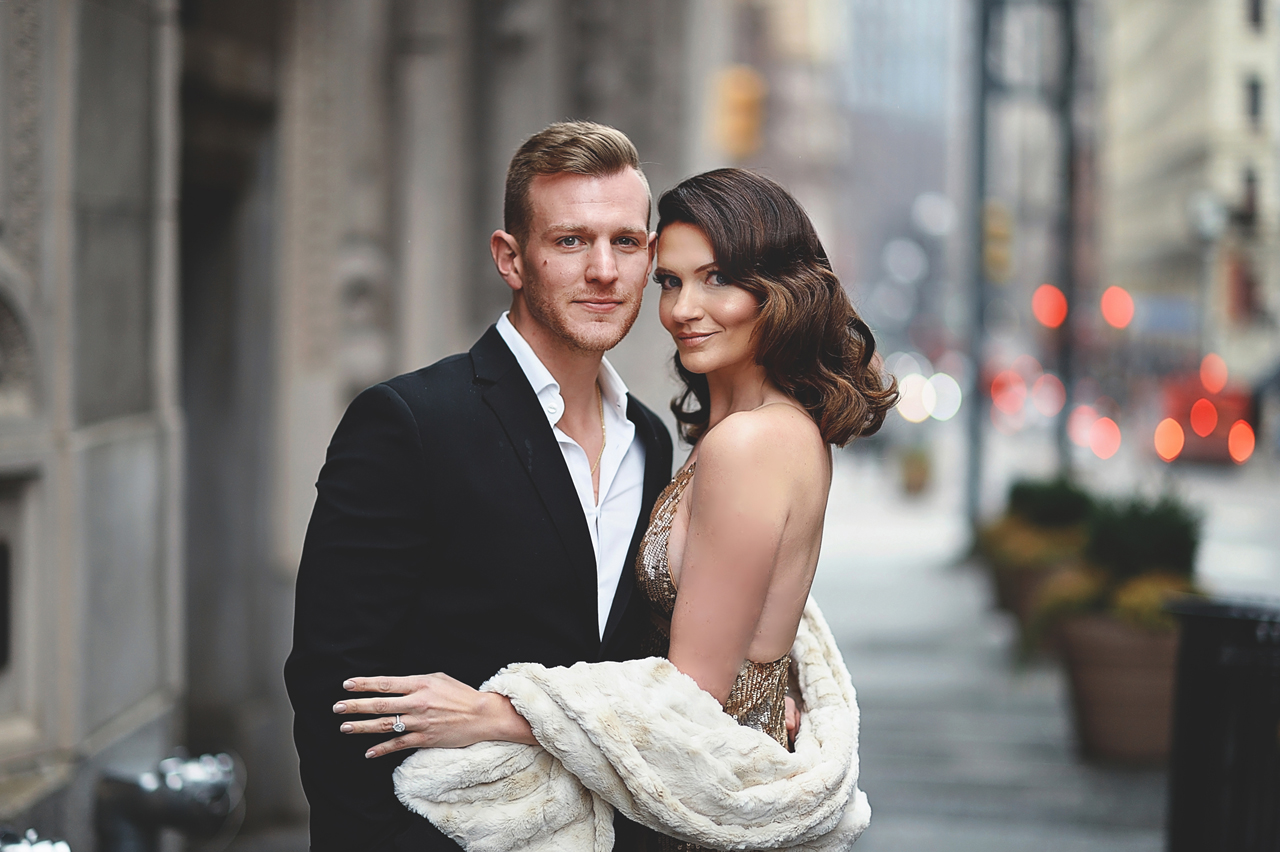 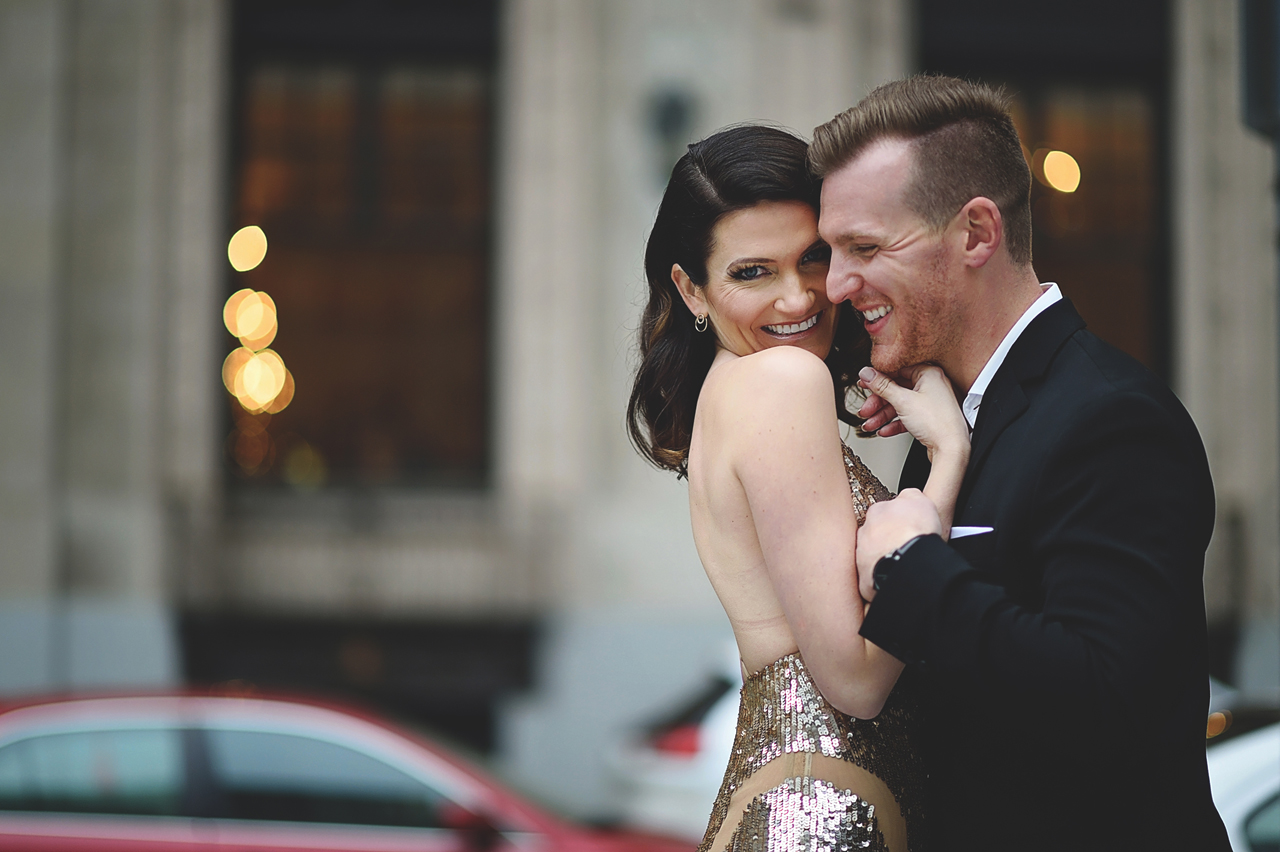 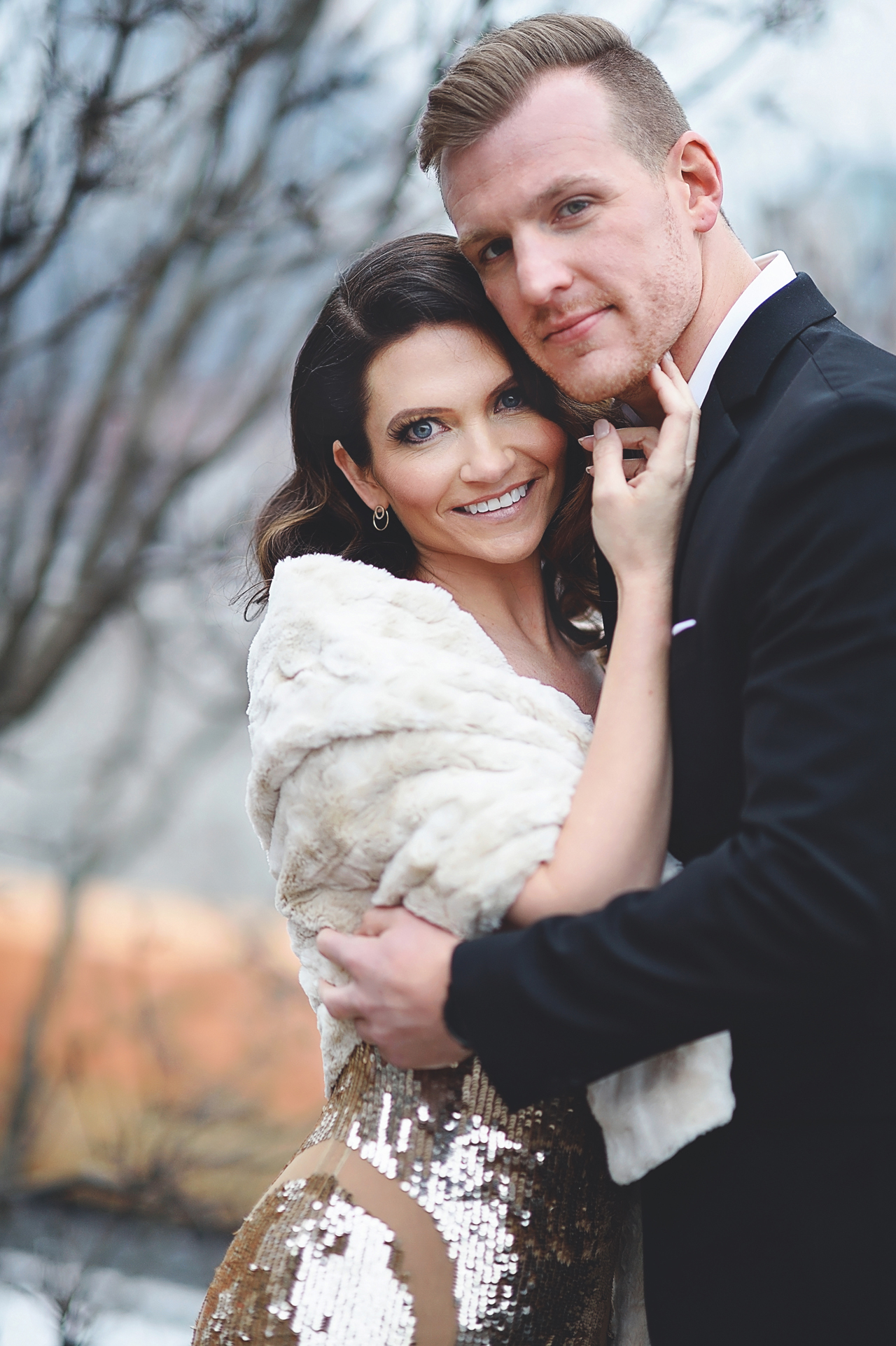 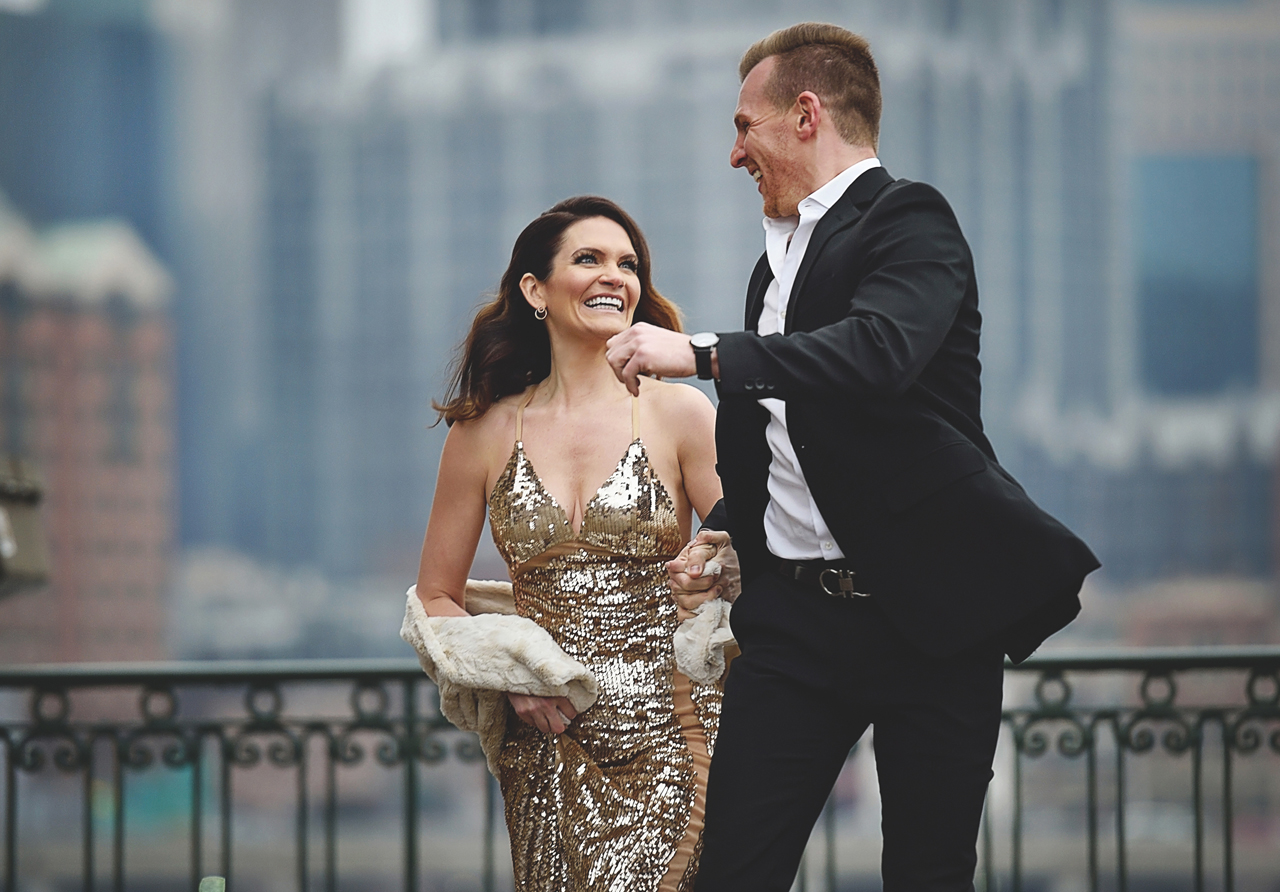 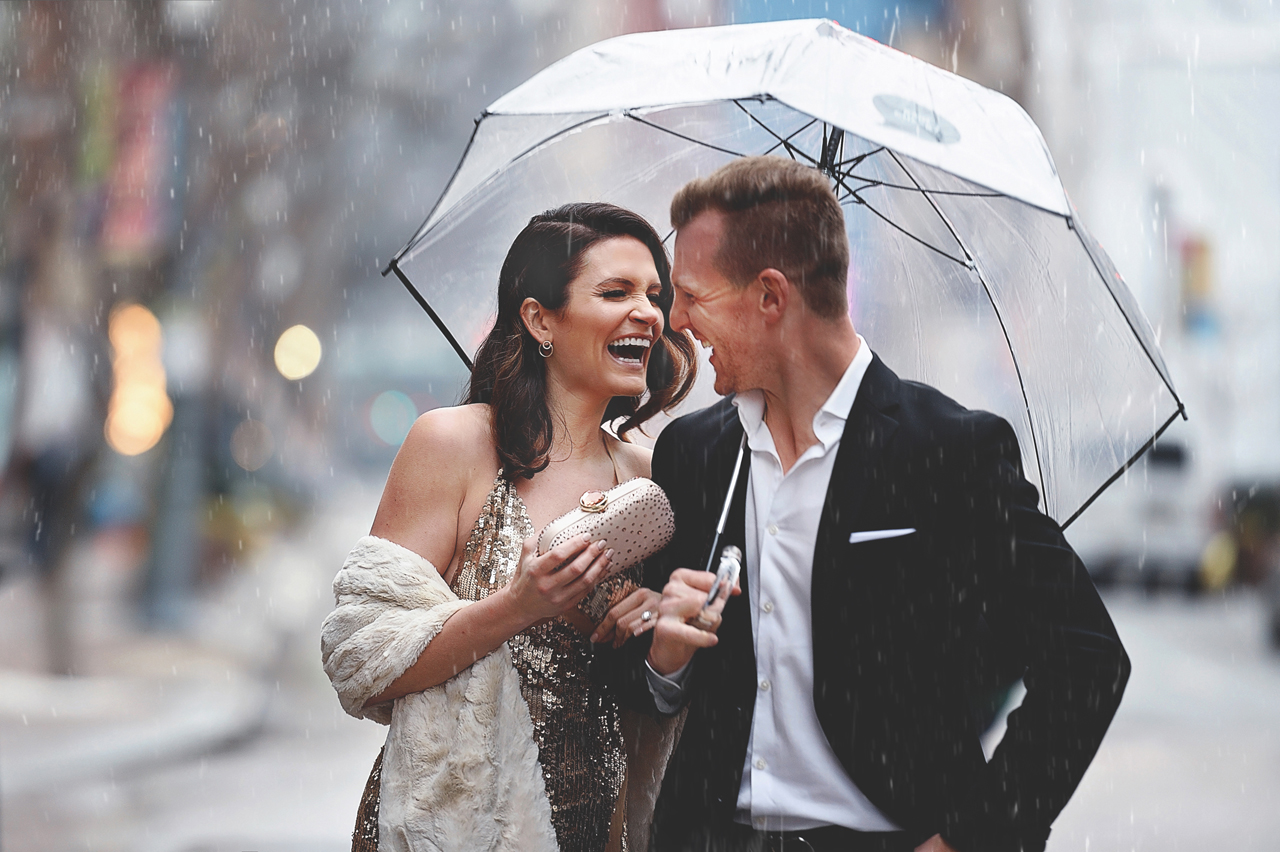